The automotive sector was strongly impacted by the coronavirus crisis, which is why the President of the Republic proposed a recovery plan to save it.

As a result of the pandemic, all sectors of the economy have been affected worldwide. After the plans for culture and tourism, the government is proposing a plan to turn around the auto sector. It will be followed by those from the aeronautics and defense industries in June, then from technology and construction. For hotels and restaurants, measures have been taken to open establishments from June 2 in departments in the green sector, while following health rules.

President Emmanuel Macron visited this May 26 site of the Valeo factory in Etaples (62) with the Minister of the Economy, Bruno Le Maire and the Minister of the Minister of Economic and Solidarity Transition , Elisabeth Borne, to present the main thrusts of her 8 billion euro aid plan to builders. The sector accounts for 400,000 direct industrial jobs in France and 900,000 with services.

While in April, sales of passenger vehicles fell 88.9% compared to the previous year, while the drop in activity was 66.5% and 85% respectively for the sales and automotive aftermarket, a survey said on May 18 that “30% of automotive service companies were at risk of bankruptcy” (Renault plans to close 3 sites (Choisy-le-Roi, Dieppe and Foundries of Brittany) and the conversion of Flins).

The recovery plan is accompanied by a strengthening of all support measures for the purchase, including the increase of the ecological bonus ceiling for the acquisition of a 100% electric vehicle, which increases to € 7,000 for individuals. and € 5,000 for companies. Hybrid vehicles benefit from a bonus of up to € 2,000.

The President wishes to make France the first nation producing clean vehicles in Europe, by bringing to 1 million per year, the number of electric vehicles, hybrids or plug-in hybrids, built over 5 years; the number of charging stations should reach 100,000 by 2021 instead of 2022.

The conversion premium for acquiring a new or recent used vehicle is revalued to 6000 euros. It takes effect on June 1 and concerns the 200,000 vehicles of households declaring a tax reference income of less than € 18,000 net, which corresponds to 3/4 of the French who will receive aid of € 3,000 if they exchange a polluting vehicle (petrol registered between 1997 and 2005 or diesel (Crit’air3 sticker) registered between 2006 and 2010) against a clean vehicle and up to € 5,000 against an electric or rechargeable hybrid vehicle. No change for thermal and less polluting vehicles (Crit’Air 1 petrol vehicles and recent Crit’Air 2 diesel vehicles). The total State effort amounts to 1 billion euros.

€ 200 million is planned to support equipment manufacturers and the entire sector in their move upmarket, as well as the creation of an investment fund of € 600 million in which the State will participate up to € 400 million. The rest is provided by the two major French manufacturers, Renault and PSA.

Considerations were requested from the Renault firm, which will join the European program of electric batteries carried by PSA and a branch of Total. In addition, the Head of State would like all the employees of the Maubeuge and Douai sites to have all the guarantees for their future. The state-guaranteed 5 billion euro loan promised to the builder will only be granted after discussions have been concluded and clear guarantees are given to maintain employment. A target of 240,000 vehicles produced in France must be completed and the new electric motor (100 kW) will be produced in Cléon.

PSA will increase its production in France with 50,000 units. The Sochaux site will host the construction of the new 3008 III

We will have to wait until the fall and the 2021 finance bill to discover the third part of the support plan, the second course set by Bercy with the decarbonization of the economy. 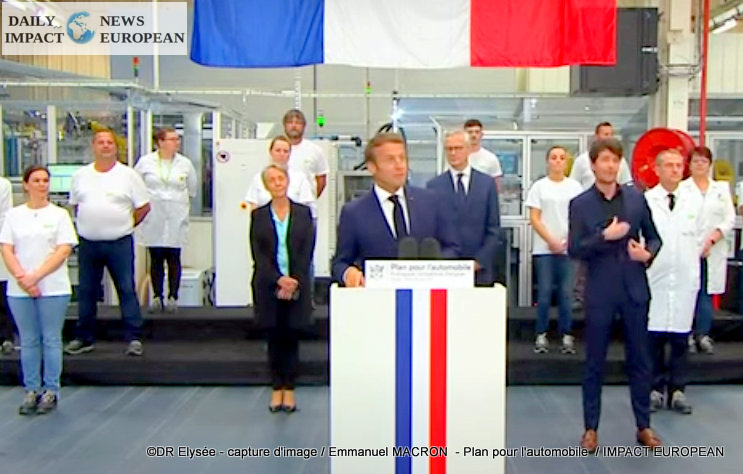