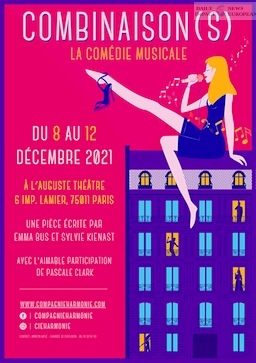 Time passes, the discussion continues and Emma finds a way to convince Sylvie to create a musical.

A day in January when nothing was progressing because we were all at home to protect ourselves from Covid-19, a government decision. Two women made the combinations by tapping through an interposed screen. Comparing themselves to two volumes of hydrogen and oxygen that give water, they create a “modern Broadway” through their new musical.

What is the musical and how was it created?

The musical is created from a theatrical genre, mixing comedy, song, dance and tap dancing. Appeared at the beginning of the 20th century, it is part of the continuity of the marriage between theater and music which gave birth in previous centuries to ballet, opera, opera-bouffe and operetta. It mainly developed in the United States, dissociating itself from the classical genre of the 1910s by integrating “new” music such as jazz. In fact, the term today mainly evokes the United States and more especially Broadway.

Have social networks brought new relationships and new projects into the new era after deconfinement?

“A meeting by screen interposed between Emma BUS, dancer and creator of shows and Sylvie KIENAST, writer and biographer.”

Sylvie KIENAST is a writer. Author of several personal works for Edilivre editions, she has also worked as a biographical writer since 2017. Her passion for life and the arts has led her to write several plays, including “Réjouissances”, performed in 2019 at the theater du Ranelagh in Paris.

A neighborhood, the seat of a family history

Through these “combinations” of spaces, characters and stories, Emma and Sylvie lead us into a bewitching comedy where permanent twists and turns, obstacles, intermingle and are resolved in joy, song and dance.

Philippine, played by Isabelle Rocher and Leo, played by Nicolas Kaplyn, are a couple who have lived together for 10 years.
She is a fashion designer obsessed with “combination” models and he, a sports coach. They learn to know failure since success is slow to appear, and the money is lacking, tensions keep rising because of the confinement. Filipina and Leo are lucky with their funny neighbors, warm and caring.
Mady, played by Corinne Frejlich, is a former singer who had a love affair with Léo’s father (Christian / Enzo, played by Fabrice Pochic). She is in a relationship with Camille, played by Alain Tournay, midwife, transformist. Catherine, Sylvie Kienast, remains a nice surprise but also a support for the couple.

When Filipina announces to Léo that she will be a mother in 7 months, the whole building becomes pregnant!

A great team on the bill

A troupe of high quality actors, singers and dancers who come together on stage to form a protective, generous and joyful bubble to which Pascale CLARK lends her voice and her talent.

Behind the show, every moment remains to be rigorously orchestrated

With “Combination (s)” come and share a real moment of simple happiness on Emma and Sylvie’s Broadway!