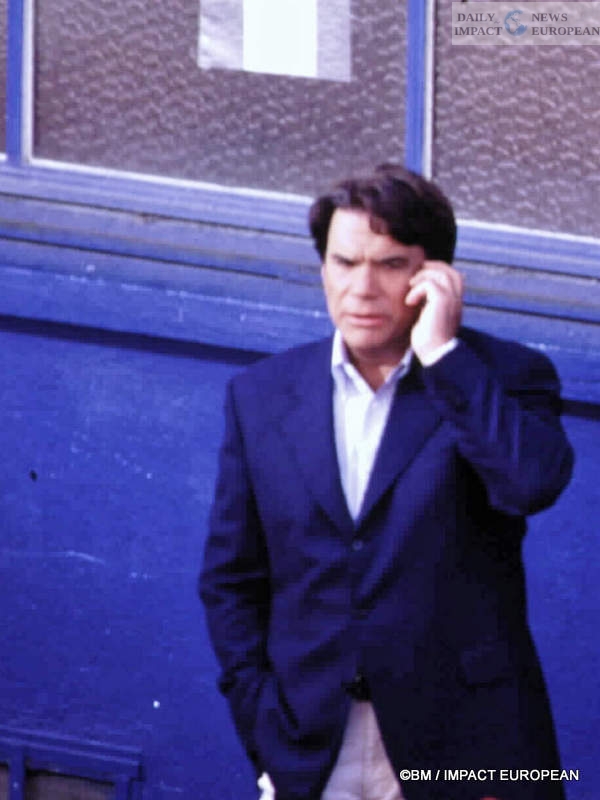 Bernard Tapie, suffered from double cancer of the stomach and esophagus.

Weakened for three years by a double cancer of the esophagus and the stomach, Bernard Tapie died this Sunday morning at the age of 78, announces his family.

“Dominique Tapie and her children have the infinite sorrow of announcing the death of her husband and their father, Bernard Tapie, this Sunday October 3 at 8.40 am, as a result of cancer. He left peacefully, surrounded by his wife , his children, his grandchildren, and his brother, present at his bedside. He expressed his wish to be buried in Marseille, his city of heart “, writes his family in a press release.

Bernard Tapie died Sunday morning at the age of 78 from stomach cancer, and with the departure of this strong-mouthed, literally and figuratively, it’s a bit of a page of recent French history which is turning. Because for more than four decades, “Nanard” has been present everywhere. On the airwaves, on screens, in stadiums and on the road … On the stage too, in front of the microphones, in the trading rooms and in the courtrooms. Without forgetting a passage noticed under the gold of the Republic.

Successful entrepreneur, Minister of François Mitterrand, boss of the press and of a football club, but also actor, Bernard Tapie has lived several lives. Born January 26, 1943 in Paris into a modest family, he first specialized in the takeover of ailing companies until, in 1990, he bought the German giant Adidas. The resale of the sports equipment supplier in 1993 triggered a conflict with its historic banker, Crédit Lyonnais.

Bernard Tapie’s undeniable business acumen was at the origin of his success, as he was sometimes very close to causing his downfall. In any case, it was through this that the man acquired a certain notoriety first, then fame. Initially selling televisions, he specialized in setting up businesses, then in taking over companies in difficulty or even in bankruptcy. It was in this last activity that he built his reputation, but also a huge fortune. His method: buy out companies for a symbolic franc, put them back on track, sometimes at great expense of job cuts or relocations, and resell them at a high price.

But his biggest blow, “the affair of his life”, he swears at the time, remains the recovery in 1990 of Adidas, a sports giant in distress against its American competitors, Nike and Reebok. In three years, with a change of logo and relocation, he relaunched the brand, which he sold in 1993 to a group of investors, including Crédit Lyonnais. A complex case of surplus value followed, marked by successively favorable and unfavorable court decisions, then by suspicious arbitration. This case will have pursued Bernard Tapie until his disappearance.

Business, Bernard Tapie was finally able to return to it thanks to a favorable arbitration, then contested, which awarded him the tidy sum of 403 million euros. He who does not carry journalists in his heart becomes the main shareholder of the group La Provence, and therefore boss of the Marseille regional daily. A position he would hold until the end of his life.

On the strength of his success, he launched into politics, crowned with the image of a slayer of the National Front and a defender of young people from the suburbs. François Mitterrand, then President of the Republic, had him appointed Minister of the City in the government of Pierre Bérégovoy in 1992.

The following year, in 1993, he won with Olympique de Marseille, bought in 1986, the Champions League, a unique success to this day in the annals of French football. A victory marred by the corruption case of the OM-VA match which broke out a few days before.

Caught up in the courts, Bernard Tapie was sentenced six times for “corruption”, “tax evasion” or even “abuse of corporate assets” and was imprisoned for five months in 1997. Accused of having “rigged” the controversial arbitration which he held. granted 403 million euros in 2008 to settle the dispute between him and Crédit Lyonnais, he was again convicted in civil proceedings for “fraud” in 2015 but released in criminal proceedings in July 2019.

This is one of the most famous archives of young Bernard Tapie. In 1985, he took over The Blues of the Businessman and his famous J’aurais wanted to be an artist. Few songs stick as closely to the skin of the man who chose Bernard Tapy as his stage name in the mid-1960s for a failed song career attempt. Because if he made his fortune as a business man, if he embraced a political career for a while, his artistic streak has always resonated.

Undoubtedly, Tapie loves the light. His career as a singer prematurely aborted, he embarked on comedy after his legal setbacks in the 1990s, which made him ineligible and prohibited him from doing business. In 1996, he played the leading roles in Men, Women, mode of employment by Claude Lelouch. He returned to the song briefly during a duet with Doc Gyneco, titled C’est beau la vie in 1998.

Then it is on the stage that he acts as an actor. In Flight above a cuckoo’s nest, then in Un beau salaud, or in Oscar, once popularized by Louis de Funès. Bernard Tapie is also rife on the small screen, in Commissioner Valence, between 2003 and 2008 on TF1. A policeman role for the one many saw as a bandit.

From a first marriage, he had two children, Nathalie, who has always remained very discreet, and Stéphane, who followed his father on his travels. A time host and producer for TF1, he also appeared in episodes of Commissioner Valence, a series in which his father played the title role. He is now director of digital activities for the La Provence group, owned by Bernard Tapie.

From a second marriage, Bernard Tapie had two more children. Laurent first. He is in the footsteps of the businessman he chose to follow. In May 2010, he launched bernardtapie.com, a site supposed to bring together good deals. The adventure flopped, but it shows that Bernard Tapie stops at nothing, not even lending his name and his image – in advertisements – to help his children.

The youngest, Sophie, who made her talk by giving voice. A 2012 candidate for The Voice season, she passed several stages before being eliminated. She released an album in 2015, with the unwavering support of her father. On this occasion, she paid him a tribute in Gala: “I know a gentleman who has been with his wife for 40 years, it’s quite respectable in our time, who has raised four children, who cooks very well, and who is always there when things are not going well and when everything is going well “, Sophie had slipped.

The President of the Republic Emmanuel Macron and his wife Brigitte, among other many politicians and personalities, paid tribute to the deceased businessman. The presidential couple praised the “ambition, energy and enthusiasm” of Bernard Tapie, which he said inspired “generations of French people”.

“It is with deep sadness that I learn of his passing. It is part of the history of Marseille, the history of our greatest collective emotions, those that have marked our city, our club (Olympique de Marseille) and its supporters, ”the mayor of Marseille said on Twitter. Benoît Payan, emphasizing in particular the commitment of a man who “went directly to fight against the extreme right”.

The defender of suburban youth, Bernard Tapie, who strikes the spirits by accepting a televised debate in 1989 against Jean-Marie Le Pen – the latter also paid tribute to him on October 3, 2021, evoking “the exceptional character of his personality ”.

Prime Minister Jean Castex told him after the announcement of the death, quoted by BFMTV: “The first image that comes to me is that of the fighter.” “He has always been very committed against the extreme right, but above all for causes, his club, his city, the company too,” added the head of government.

Bernard Tapie had played one of his final roles in recent years. “Every morning I wake up with the urge to fart my face at my cancer.” Emaciated, the hair sparse, the formerly thunderous timbre reduced to a thin stream of voices. Even when he was the victim of a very violent assault in his home a few months ago, he had not lowered his head. But this battle, Bernard Tapie ended up losing it today.