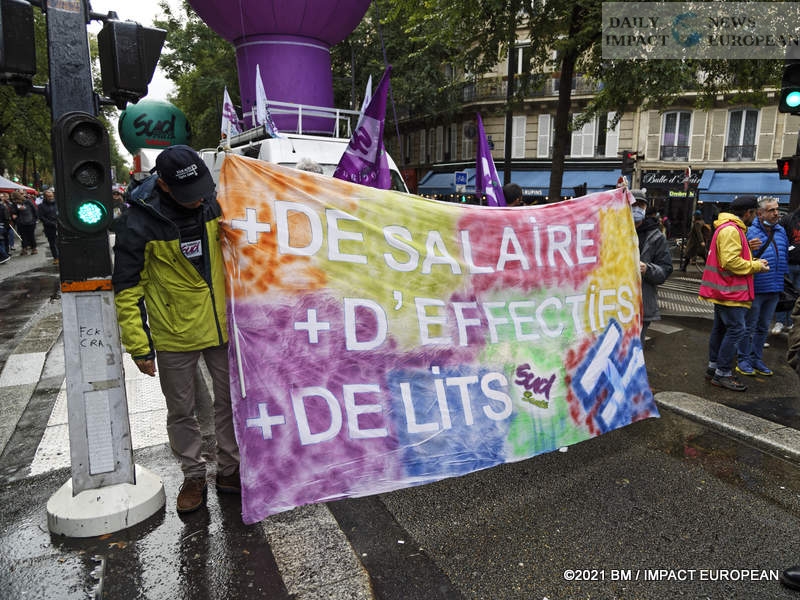 As with the pension reform, the government has proposed a new decree on the reform of unemployment insurance (application scheduled for October 1). According to the unions, this degrades the level of benefits and rights, creating strong inequalities between beneficiaries. For people alternating periods of unemployment and short contracts, it would be up to them to put pressure on the employers to obtain better working conditions.

A few days after the movement of retirees against precariousness, the unions called for a unified demonstration across France on October 5.

In Paris, they were 25,000 to mobilize in peace. A total of 85,400 people demonstrated in France according to the Interior Ministry, 160,000 according to the CGT. The question of wages and the reforms of unemployment insurance and pensions were at the center of the demands.

The civil service union (CGT, FO, FSY, Solidaires and FA-FP) called on civil servants and public officials to strike. They targeted unemployment insurance reform in particular, calling on the private sector to join them.

For years, public policies have impacted working conditions and purchasing power. To remedy this, civil servants and public officials ask:

In this difficult period linked to the health crisis, the health of the population and employees is at the center of the debates. However, vaccination should not weigh as a sanction on the professional level. Following the bill and its applications since September 15, mobilizations increase in the public service to obtain its withdrawal.

The Prefecture initially refused a first route to go to Concorde. According to the CGT, it seems that the proximity of the ministries and Place Vendôme is the reason. She also denounced an obstacle to demonstrate.

Finally, the procession left at 2 p.m. from the Republic (75010) to go to Chaussée d’Antin (75009) via Bd Magenta and rue Lafayette. Linked to the crisis which led to the loss of 12,000 jobs, this general strike of October 5 produced disruptions in public transport and stalls in the administration. The demonstration, surrounded by the forces of order, took place peacefully.

Before the departure, Philippe Martinez, leader of the CGT declared: “We will not wait until the day after the presidential election to increase salaries”. He had called for “urgent responses” the day before, insisting “that there was a problem of wages in this country”. His union also demanded a 20% increase in the minimum wage.

For his part, Yves Veyrier, secretary general of FO called for an “urgent revaluation of all these trades stuck to the minimum wage”. It is based on “the price increases which have come to increase the pressure on purchasing power. “

Simon Duteil, co-delegate general of the Union Syndicale Solidaires, has demanded a minimum wage of 1,700 euros net and an increase in pensions so that there is no retirement pension below the minimum wage.

It will be noted all the same that the strike was little followed in transport with a traffic “normal” for the TGV, and “almost normal” for the TER, except in Normandy where it was “disturbed”. National education was only 4.06% at midday among teachers. In energy, nuclear production is on strike at 30%.

Other parades took place in the provinces: in Lyon (2,300 people); Marseille (3,500 where a strike by garbage collectors took place; Toulouse (2,400); Montpellier; Lille; Bordeaux; Nice or Toulon …

As with the pension reform, the government has proposed a new decree on the reform of unemployment insurance (application scheduled for October 1). According to the unions, this degrades the level of benefits and rights, creating strong inequalities between beneficiaries. For people alternating periods of unemployment and short contracts, it would be up to them to put pressure on the employers to obtain better working conditions.

On October 9, a new anti-pass demonstration took place. It followed the maintenance of the health pass, at least until November 15. For this 13th Saturday, the mobilization was still down with 45,300 participants. In Paris, 5,300 people were separated into 2 processions. The demands were the same as in previous weeks. We met in the processions, firefighters and caregivers, some of whom were suspended for not showing a health pass. On the signs, we could read “France, be dignified, vaccine freedom” or “Rather fine and prison than stung”. Freedom of vaccination is always at the heart of the mobilizations, it should not be subject to dismissal.
In the provinces

Other processions took place across France, in Limoges, the police used tear gas.