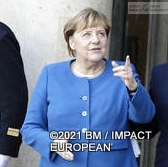 The German Chancellor continues her farewell this Sunday by being in Israel where she congratulated herself on the degree of solidity of the Israeli-German relations, in spite of the past.

The German Chancellor continues her farewell this Sunday by being in Israel where she congratulated herself on the degree of solidity of the Israeli-German relations, in spite of the past.

Israel’s security will remain a priority for ‘any German government’, Chancellor Angela Merkel said on Sunday on her last official visit to the Hebrew state, with which Germany has deepened relations during its 16 years in power. The Chancellor, who arrived late Saturday evening in Tel Aviv, met Israeli Prime Minister Naftali Bennett in Jerusalem on Sunday morning.

“The bond that unites our two countries is an invaluable gift, an unlikely gift in the face of history.” The words of Chancellor Angela Merkel during her previous visit to Israel in 2018 characterize the unique relationship between the Jewish state and Germany: that of a friendship long considered unnatural, and which blossomed against all predictions.

The visit was originally scheduled for August but was postponed due to the withdrawal of US forces and their allies, including Germany, from Afghanistan, paving the way for the Taliban to return to power.

This cooperation is particularly fruitful today at the military, scientific, academic and above all economic level: Germany has thus become Israel’s largest trading partner in Europe. There are also very dynamic youth exchange programs focused on education and commitment to bilateral friendship.

This normalization of relations has even worked so well that there are countless young Israelis who live and thrive in Berlin (currently 7,000 according to the local Bureau of Statistics), many of whom are descendants of Holocaust survivors. “The reasons that attract so many Israelis to the German capital are complex,” said Professor Gisela Dachs, who teaches at the DAAD Center for German Studies and at the European Forum at the Hebrew University in Jerusalem. “Apart from the undeniable economic advantages (cheap real estate, relatively low cost of living) and the dynamic and multicultural aspect of the city, there is also something which stems from a kind of somewhat morbid fascination, an idea of revenge on history, ”she says.

Berlin’s separate position vis-à-vis the Jewish state is particularly marked during conflicts between Israel and Palestinian terrorist groups. In an often discordant voice in the concert of nations, Germany has always expressed unwavering support for the Jewish state, asserting its right to defend itself against aggression from its enemies. “The Chancellor strongly condemns the continuous rocket attacks on Israel aimed at killing civilians and spreading terror. Nothing can justify terrorism and we support Israel’s right to defend itself,” he said in May. last the spokesperson for Angela Merkel during the operation “Guardian of the Wall” which opposed the Jewish state to Hamas. The characterization of the BDS (Boycott Divestment Sanctions) organization as “anti-Semitic”, or the prohibition of all Hezbollah activity in German territory, falls under this same determination of Berlin.

And when certain points of disagreement emerge, notably concerning the two-state solution or the construction in the Israeli settlements of the West Bank to which Germany is opposed, the German leaders always take care to formulate when formulating criticism of Israel.

“The relationship between Germany and Israel was strong, but under your tenure it has become stronger than it ever was. It is no longer just an alliance, but a true friendship. and we owe it to your leadership, ”said Bennett.

Angela Merkel, who is due to visit Yad Vashem, the Holocaust memorial in Jerusalem later on Sunday, welcomed the fact that after the Jewish genocide by Nazi Germany, relations were able to reach “such a level” between the two countries.

“The issue of Israel’s security will always remain of central importance to any German government,” added the chancellor, whose years in power in the Israeli press praised, the daily Israel Hayom (right) saying “no chancellor German had done as much to improve relations between Germany and Israel as Angela Merkel “.

The two leaders are also due to discuss on Sunday the Iranian nuclear program which has “crossed all the red lines,” Bennett recently told the UN, asserting in the wake that the Jewish state “was not going to allow” Tehran to acquire atomic weapons.

In this regard, Israel is trying to convince the European troika (France, United Kingdom and Germany) to avoid entering into a new agreement with Iran which could eventually allow it to acquire a nuclear bomb.

During her 16 years in power, Angela Merkel made Israel’s right to defend itself against its enemies one of the priorities of German foreign policy, while pleading for a dialogue on this sensitive issue.

Angela Merkel left a special mark on Israeli-German relations, making links with the Jewish state one of the pillars of her foreign policy, as evidenced by the frequency of her trips to the Holy Land – eight in total. during his 16 years in power. The attachment of the outgoing chancellor to the Jewish state – which is again expressed in this farewell visit to Israel that she insisted on making this Sunday, October 10 when nothing was forcing her to do so, according to many , to the fact that she grew up in a communist East Germany which did not recognize the responsibility of the country in the Holocaust, nor did it recognize the State of Israel when it was created in 1948 : the ravages of denial and arrangements with memory would thus have forged his political consciousness.

This unique relationship of the German leader with the Hebrew state culminated in her landmark speech to the Knesset in 2008, as Gisela Dachs points out. “Firstly because she was the first head of state to speak German in the Israeli Parliament”, explains the teacher, who specifies that Angela Merkel had not planned to speak in her native language, out of respect for the country, but that she had finally let herself be persuaded to do so. “Secondly, because in her address she called Israel’s security a ‘raison d’etat for Germany’, extremely strong and completely new words.” For many analysts, the Chancellor that day conceptualized the – until then tacit – idea of ​​specificity in Israeli-German relations and of Germany’s responsibility for the continued existence of the Jewish state.

Despite the upcoming change of government in Germany and the memory of the Holocaust which is inexorably fading, Gisela Dachs does not believe that bilateral relations will deteriorate in the years to come, even if a slight change of wind could. to be smelled. “The leaders of the Social Democratic Party that won the election are of the same generation as Angela Merkel, so they will continue on this path of consensus against Israel, at least on the surface. young people from the SPD party and from that of the Greens which should be part of the coalition, are making their voices heard, in particular on the issue of Palestinian rights. “

In August 2020, in a particularly moving event, Israeli Air Force planes flew over the former German concentration camp at Dachau for the first time alongside Luftwaffe aircraft, materializing like never before. the will that has governed Israeli-German relations for nearly 60 years: that of taming the past in order to better understand the future.

The two leaders are also due to discuss on Sunday the Iranian nuclear program which has “crossed all the red lines,” Bennett recently told the UN, asserting in the wake that the Hebrew state “was not going to allow” Tehran to acquire atomic weapons.

Israel is trying in this regard to convince the European troika (France, United Kingdom and Germany) to avoid entering into a new agreement with Iran which could eventually allow it to acquire a nuclear bomb.

During her 16 years in power, Angela Merkel has made Israel’s right to defend itself from its enemies one of Germany’s foreign policy priorities, while advocating for dialogue on this sensitive issue.
Ramallah snubbed

For this last visit to Jerusalem, Angela Merkel has not planned a detour to Ramallah, seat of the Palestinian Authority of Mahmoud Abbas in the occupied West Bank, although Germany remains in favor of the solution of “two states”, one Palestine. independent and viable alongside Israel.

Today, more than 675,000 Israeli settlers live in East Jerusalem and the West Bank, Palestinian territories occupied by Israel since 1967.

And although she openly opposes colonization, which is illegal under international law, Angela Merkel remains criticized by human rights activists who criticize her for not having a strong enough rhetoric on this issue.

“The new German government will have to put human rights at the center of its policy on Israel and Palestine,” said Omar Shakir, an Israeli-Palestinian conflict specialist for Human Rights Watch this weekend.

While no hook is planned by Ramallah, no meeting is scheduled either with Benjamin Netanyahu, the current leader of the Israeli opposition, in power for most (12 years) of the Merkel years.

After 16 years in power, the Chancellor is about to leave the place as German Social Democrats, Greens and Liberals try to form a coalition unprecedented in Germany, without the conservatives of Angela Merkel.